But, if I were to choose one among Blackstone Griddle 28 Vs 36, I would definitely choose the  1825 model. Why’s that? Let’s see

There are many other convenient facilities with the Blackstone 36 (1825) model. It provides greater value than Blackstone 28 (1517). Those are enough reasons for me to go with Blackstone 1825.

As you have seen before, the 1825 griddle has bigger cooking spaces, more burners, and more preparation shelves than the 1517 griddle. But, both of them have more similarities.

Now, let’s see what they are.

The size of a Griddle is an important factor. The (36) 1825 griddle is larger than the Blackstone 1517 (28). But, sometimes bigger sizes can become a disadvantage.

At the same time, it comes with larger preparation shelves on the sides. Moreover, if you have an outdoor kitchen or enough table space in the backyard, you can remove the side shelves.

The griddle is also heavier than 1517 grills, which is obvious. But, this impacts the portability of the griddle. Although both of them have wheels, occasionally you may need to lift them.

Moreover, if you have any thought of taking your griddle on camping trips, you will have to hassle more with an 1825 griddle.

Burners In Each Unit

Despite cooking space being only 38% larger, Blackstone 1825 griddle has double burners than 1517 griddle. Thus, it creates a significant increase in heating capacity. The 1825 griddle has 4 burners, whilst the latter has 2 burners. They have a 30000 BTUs difference.

Moreover, those 4 stainless steel burners of the 1825 model can perform individually. You can lower the heat on one side where you are making potato crispy, and on the other side searing meat at a rigorous heat.

On the other side, the smaller griddle 1517 has 2 H-style Burners. It’s impossible to achieve two spot cooking with it. However, it requires less propane.

For 4 burners, which can accumulate more BTUs, it needs extra propane. Which means additional expense. But, the 1517 model can save your money.

Assembling is a pain in the rear for many people including me. Anyway, you have to do it even if you don’t like it for those delicious foods.

Both of them come with the same stuff and their instructions are also the same. You need more than one person to set up the griddles. Overall, setting up isn’t tricky. The instructions are clear in the guidebook and also have lots of visuals on the internet.

Flat griddles are always easier to clean than any traditional grills. In addition to that, the Blackstones have simplified the cleaning, thanks to their innovative dripping facility. Which allows greases to easily pass through.

According to Blackstone, cleaning their griddles isn’t tricky. Those don’t need soap cleaning, brushing, or drying, as the surfaces are non-stick. All you need to do is season and store properly.

Both griddles come with a full guidebook on how to clean the griddle. Following that, you should clean your griddle on a regular basis.

Portability is important for many people, as they need to wheel around their griddle a lot. Both of the griddles are wheeled.

The 1825 griddle is 45 pounds heavier than the Blackstone 1517 one. So, it’s harder to lift around. If you are thinking about tailgating the griddle at sports events, you have to consider it again.

With more weight, the Blackstone 36 (1825) griddle needs more space. Thus, storing or fitting is problematic too.

Instead of price comparison, we should compare which one provides more value. With the bigger griddle, you can control the burner individually. Thus, it allows you to cook different foods at once.

Burner provides more BTUs too. So, you can cook some recipes that require a high temperature, and is impossible with the smaller griddle.

However, the additional burner will also cost you more propane means more expense.

In consideration of value, they provide the same. The Blackstone 1825 (36) griddle offers extras, so it will cost you some extra dollars. On the other hand, the 1517 griddle is cheaper.

FAQs About the Blackstone Griddle 28 Vs 36

Yeah, the new addition of 1517 comes with H-shaped burners.

Can I put the griddle in my outdoor kitchen?

The legs of both griddles are removable. So, yes, you can.

Will the griddle rust?

If you store them with cover, and season properly after each use; the griddles won’t rust.

Is 28-inch Blackstone big enough to use as a griddle?

The short answer is NO, 28 inch Blackstone griddle is not large enough. It’s a bit small for pancakes and eggs – you will have to cook them in batches – and is too tiny for bacon and sausages. If you want to use your Blackstone as a stove-top griddle, you should go for the 28-inch griddle with legs.
The 36 Inch Blackstone Griddle is a Big Boy; I use it as a stovetop grill and cook breakfast for up to 12 people from morning till afternoon – if need be! It’s large enough to use as a stovetop grill and combined oversized camp grill.

Can you cook on both sides of the griddle?

Yes, when the griddle has reached the desired temperature, you can cook on both sides simultaneously.

How big is a Blackstone Griddle?

The griddles are 28 inches long and 15 inches wide; they’re easy to store!

What type of surface is Blackstone made from?

Blackstone griddles are cast iron with an enamel coating for easy cleaning!

Can you put a lid on the griddle?

When cooking something like bacon or eggs, you can add a lid to trap heat and cook whatever is inside faster. The 28″ Blackstone Griddle is perfect for processing meat in bulk, searing steaks, boiling water for pasta, large enough to cook an entire turkey or a whole hog!

Although from the beginning I’m siding with Blackstone 1825, it doesn’t mean 1517 is not qualified. Even some people opinionated, the latter is better.

1517 is a great choice as it is more portable and cheaper than 1825. But, if not, then definitely 1825 is the best. It is not only bigger and accumulates more heat, but it also provides a greater value of money. 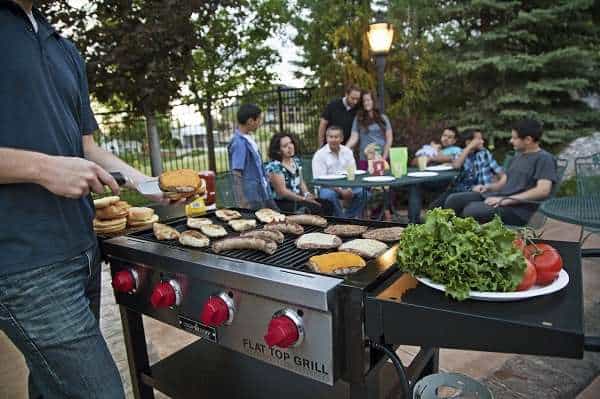 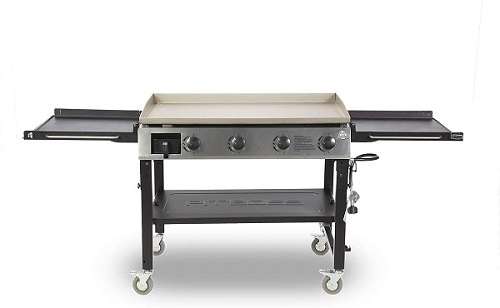