If you are looking for a top toaster under $100, the Cuisinart TOB-1010 is among the top. This model is simple and has an old-school appearance but provides a reliable cooking experience.

You won’t have many convenience features with it, but you’re going to love it because of the simplicity of the machine.

Despite being an oven, it lets you toast, bake, broil, and keep your food warm. With so many functions, it still costs a little. Today, you will know whether it is worth the hype it’s getting recently.

Although the Cuisinart TOB – 1010 is a pretty small machine compared to others, it’s by no means a compact counter machine. It is 16 inches long, 19 inches wide, and 11 inches long. So, it will undoubtedly take a corner of your countertop.

Out of the box, it will look like the old-school interior of the Cuisinart toaster oven 1010. With stainless steel housing, it doesn’t look bad on any countertop. The control panel is pretty simple. By adjusting the three dials, you can cook most of the things. The dials are for cooking functions, temperature, and time.

Thanks to its reasonable size, you can cook a good amount of food, enough for a medium-size family. The interior has adjustable cooking positions, which allows you to cook a whole turkey.

It’s a simple machine but provides excellent performance. With several cooking functions, you can cook almost anything. And all the functions provide above-average results. Anyways, one or two functions won’t be able to keep up with others. But that’s expectable with a low-budget oven.

The cooking speed of the compact machine isn’t bad either. The 0.5 feet interior is enough to cook a medium-sized family. Moreover, get the precise toasting with the. It uses an 1800-watts motor to operate the machine, so it heats up quickly.

These two are two essential features you should look at in a convection oven. Firstly, cleaning is a must after each cooking period. Usually, cleaning is pretty boring; if the process is complex, people will avoid cleaning as much as possible. Thankfully, all the removable parts have non-stick coating dishwasher safety. Even the interior is non-stick. So, it won’t take a long time.

I already mentioned several times its user-friendliness several times. So, you have an idea of how easily operating the model is.

What Users Are Saying About Cuisinart TOB-1010

Cuisinart is known for providing budget-friendly kitchen appliances, which do better than what you paid for. The same with the Cuisinart tab-1010. The machine comes at under hundred dollars and doesn’t require a lot of space on your countertop.

Design-wise, it’s not something you will be attracted to at first glance, but well made. The walls feel thin but not flimsy. With stainless steel coating, the machine isn’t half bad.

It offers quite some cooking functions, including some essential cooking methods – toast, bake, broil, and keep warm. But, rather than that, the machine doesn’t have many functions.

It has three dials for adjusting the functions, time, and temperature. That makes the machine so simple, and the reason for users prefer this machine.

But, as with a budget-friendly Cuisinart air fryer toaster oven, you need to face some demerits with the model. If you can tackle those, the model is a great option.

Does the Cuisinart TOB-1010 an interior light?

No, this model doesn’t have any interior light. A thermal switch turns off the elements before the toast is done when you try to toast two consecutive slices of bread.

Does this toaster don’t have a timer?

No. It directly doesn’t have a timer, but that set depends on how dark you want your toast.

Can I heat pizza on both racks at the same time?

The model only has one rack. So, the bottom has a pan, but you can’t put a pizza on that. So, only heating one pizza at a time.

Does it have a kitchen timer?

You can use a manual 30-minute timer when roasting or baking in the oven. This feature comes in handy when your meal isn’t finished cooking, and you don’t want to overcook it by forgetting to check it.

How do you clean the inside of a Cuisinart TOB-1010 toaster oven?

The inside of the oven is nonstick, so you won’t have to clean it or if something spills. Just wipe with a paper towel, and your good.

Is the Cuisinart TOB-1010 stainless steel?

No. It is made of silver plastic with a stainless steel finish.

Can I use metal utensils in the Cuisinart TOB-1010?

Since this model has a non-stick interior, metal utensils can scratch the casing. You should use silicone, plastic, or wood utensils in this model to protect the non-stick surface.

Can you put aluminum foil in a Cuisinart TOB-1010?

No. Aluminum foil is used in ovens when you want to keep food moist while cooking. There are holes in the oven’s lid, and the foil blocks them. Cover food with a sheet of paper towel and then use the foil to block the holes to use aluminum foil.

Can you toast bread in a Cuisinart TOB-1010 Toaster Oven?

Yes, the Cuisinart TOB-1010 toaster oven can toast bread or bagels. You must use a low setting for this function and observe, so it doesn’t burn.

What is a good cookbook for the Cuisinart TOB-1010?

I have not found one specifically designed for the Cuisinart TOB-1010, but I have many cookbooks with oven recipes.

What are some recipes to use in the Cuisinart TOB-1010?

Crockpot Lasagna is one of my favorite crockpot recipes that work well in this model. You can also use the Cuisinart TOB-1010 to bake cakes and pies. I have found this model does a great job baking cheesecakes.

Does a Cuisinart TOB-1010 have a convection feature?

No. The Cuisinart TOB-1010 is not a convection toaster oven.

Can you use a Cuisinart TOB-1010 as a meat thermometer to ensure the food is cooked correctly?

Yes. You can use temperature tests to ensure your meat is fully cooked. I like to cook my turkey in the oven until it reaches 170 degrees, then remove it from the oven and cover it with aluminum foil. This keeps your turkey moist while waiting for other side dishes to finish cooking.

What are some excellent tips for using a Cuisinart TOB-1010 toaster oven?

If you plan on cooking several batches of cookies, use two cookie sheets. You will get more consistent results by baking one sheet at a time and rotating the top and bottom pans halfway through your cooking time. Align the baking pan with foil or parchment paper, so it doesn’t get stuck and makes it clean.

What temperature should I use in a Cuisinart TOB-1010?

It is recommended you set the heat at 350 degrees for bread, pizza, cookies, and casseroles. When cooking meats or poultry, keep the temperature at 400 degrees to avoid burning. When roasting vegetables or baking cakes or pastries, set the heat at 375 degrees.

As time passes, the toaster ovens are getting more complicated with more and more functions. Even the low-budget models have tons of functions these days. Thus, setting the models for cooking takes more time than cooking.

If you want to get out of those complicated models and want to try something simpler, Cuisinart TOB-1010 is the best option. But, not take its simplicity as its incapacity, though.

It is a fierce beast when it comes to cooking. It also has several cooking functions to save some space from some equipment. So, I would recommend purchasing it without any hesitation if it matches your requirements. 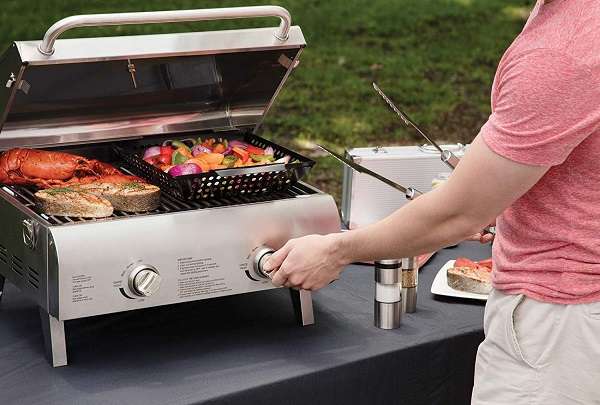 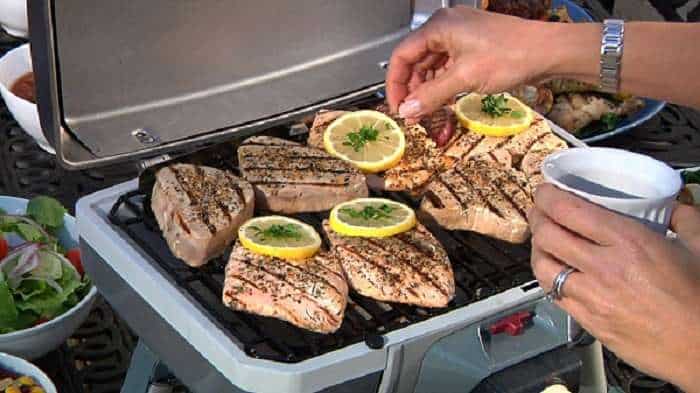