Ninja Foodi SP series was introduced to take over the traditional toaster ovens. With their wide cooking space, multi-cooking functions, easy navigation, and precise cooking, they are bound to be loved by users. Today’s article will be about the Ninja SP201 review.

The small but mighty Ninja SP201 is built well from every expectation, blending with fierce power, consistent temperature, and better control.

It comes among the fastest preheating oven; only takes 60 seconds from the time you turn the machine on. Moreover, its dual heat mode lets you cook faster than usual.

Noticeable Features At A Glance Of Ninja SP201

So far, Ninja has launched three different models in this series – SP301, SP201, and SP101. Although most of the functionalities are the same, there are still a few differences among them. Let’s see a quick comparison between the Ninja SP201 vs SP101:

Ninja SP201 is featured with digital crisp control technology, which controls the heating and airflow to address the requirements of each meal.

It circulates hot air inside the machine to cook food. As a result, foods come out to a perfectly crisp texture on the outside and juicy on the inside.

You can also control the crisping level to fit with different meals and get an outstanding cooking experience. It guarantees that every meal will be delicious at the same time.

Those days are gone when kitchens used to be cluttered with different cooking appliances, and each appliance needed to be for a specific task. But now the Ninja air fryer is multi-functioned, and the kitchen looks almost empty.

The main functions include roasting, toasting, baking, dehydrating, and keeping warm. Moreover, this also has a bagel mode and alerts you after each cooking.

The Ninja SP201 cooks up to 60% faster than other full-size electric ovens, thanks to its dual heating zone. After turning on the machine, you don’t even need to wait for 60 seconds before the machine is ready to cook your food.

Moreover, air frying your food will require 75% less oil compared to a deep fryer, so you are getting delicious but healthy meals. Its XL capacity lets you cook for your whole family in one go.

Out of the box, you will see the high-quality stainless steel finish of the Ninja SP201. Its rigid construction along with rounded corners will suit your kitchen decoration properly.

Also, it can cook a good amount of food; the machine won’t take a lot of space, thanks to its wider design. It measures 19.72 inches in width by 14.96 inches in length by 7.56 inches in height. But, its short height also has a few disadvantages; you won’t be able to roast a whole turkey. But, cooking separate parts is possible.

All the models of the SP series are highly praised by the users. Starting from the SP101, it came with a completely new design and cooking functions. And SP201 took it a little further ahead, whereas SP301 has more functions and convenience.

The Ninja SP201 is a comprehensive but short model, which gives you a lot of cooking space despite its size. And, with several cooking functions, users can cook different things, including air frying and multiple rack roasting.

Although it works like a full-size oven, it offers perfect toasting, dehydrating, and other methods. Moreover, it has two cooking moods – Air Oven Mode and Dual Heat Mode.

The dual heat model is the most eye-catching feature of the Ninja foodi digital air fryer oven. You can cook 60% faster than any traditional machine, thanks to it. It features dual heating elements, one at the top and the other at the bottom.

The multi-cooking oven has very much to offer the best outcome from the build to performance. Overall, it deserves the good name it is receiving.

Would the bottom heating element be covered with the juice dripping down?

This won’t create any fire hazard, but always put the roasting tray under the shelf while using an air frying basket.

What are the core differences between the Ninja SP201 and SP101?

From this Ninja SP201 review, you may already notice that the SP201 is slightly taller and has one extra function.

Can I place it underneath the Cabinets?

It depends on the height of your cabinet. Just keep in mind that it gets hot outside while cooking at a high temperature. So, keeping some space is mandatory.

The Ninja SP201 offers versatile cooking in your kitchen. It replaces many of your traditional cooking appliances, saving your countertop space and money. Its fast cooking speed and efficiency made it among the top list.

It preheats faster, and the max temperature reaches up to 450°F. Overall, the machine has every feature you ask for from a multi-cooker air fryer. That being said, let’s need this Ninja SP201 review. 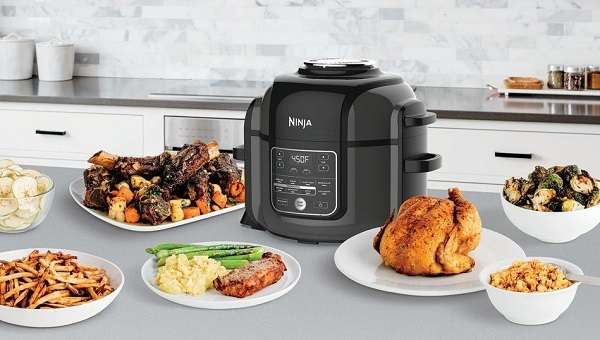 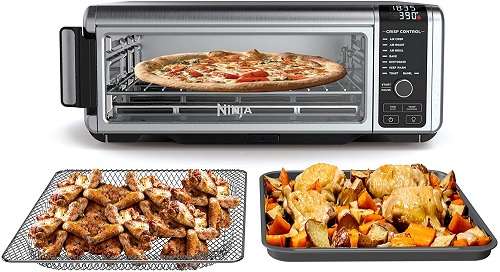