Are you confused about which one should choose from Cuisinart toa 60 vs toa 65? Cuisinart introduced two of the top-selling combination of the toaster and air fryer. They are Cuisinart TOA 65 and Cuisinart TOA 60. Finding the winner among two of these has been difficult for us as they incepted from the same brand, and comes with lots of similarities. However, ultimately I recommend the Cuisinart TOA 65 because it comes with enhanced features and you get to milk it for all its worth.

Let’s check out a thorough comparison of TOA 65 vs TOA 60 where I’ll show you the differences, similarities and compare their outlook, build quality, functionalities, and so on.

You’ve already got an idea which we recommend to be the best. But to make it more apparent first we need to look at the comparison table. So, let’s see.

Evidently, the TOA 65 looks best based on the features and functionalities it has to offer and the touch of innovation over TOA 60.

Cuisinart has introduced the TOA 60 in 2016 and TOA 65 in the latter part of 2018. These are two of the most popular toaster ovens available on the market right now. I have gone through most of the Cuisinart air fryer toaster oven reviews for both of this model on Amazon and believe me, the pros for each oven outweighs the cons.

While the TOA 60 has received over 15K+ reviews, TOA 65 has got 2K+ reviews and ratings. However, after scrutinizing all the features and functionalities, it seems like the TOA 65 is the updated version of the TOA 60, as it came later but with enhanced features.

We’ve observed mixed reactions of consumers in cases of critical reviews. Most of them praised the Airfrying features of the TOA 65 than the TOA 60. Because TOA 65 comes with multiple presets for air frying which are absent in TOA 60. Also, they expect Cuisinart to insert another level inside the interior to put the air fryer and toaster rack for a more even heat distribution.

In the end, if you ask my recommendation to choose between TOA 65 vs TOA 60, like the latest users, I will definitely vote for the TOA 65 even if it cost me a bit more than the TOA 60. In the meantime, if you’d love to be creative in the kitchen to try out multiple dishes, the TOA 65 will amaze you with its wide array of features.

What is the similarities between Cuisinart toa 60 vs toa 65?

The power rating for both machines mentioned 1800 watts on the amazon product page. I have checked the user manual and yeah, the information is 100 percent correct. It enables them to reach an optimum temperature of 450°F. Initially, the temperature keeps the food warm, and then you can control them getting up to the optimum limit.

The Cuisinart TOA 60 and TOA 65 both are built with stainless steel. They look and feel durable. And comes with an extended glass door with a cool-touch handle across the door. Inside you get two levels to put your baking pan or the air fryer grill. However, you’ll also get vents on both sides of the ovens which surpasses the hot air outside of the oven. Plus, it helps to cool it down once you finish cooking.

The capacity to cook foods similar in either of the toasters. According to the manufacturer, you can put the same amount of food inside the interior for both machines. For example, you can stash six slices of toast or three pounds of chicken wings, 12” pizza, and 3-4 pounds of a whole chicken.

Cuisinart added this useful toast shading feature in both these machines. With this option, you get to select between light to dark shading options. It also functions as a toast timer. Believe me, it works and you can set the shading level according to your preferences.

The interior light is an excellent feature common in both TOA 65 and TOA 60. It enables you to see the present state of the food you’re cooking. Either the food inside is burning or not cooking properly, the interior light makes it apparent especially in a dark ambiance.

Only a piece of convection toaster oven is not enough. Thanks to Cuisinart for adding a baking pan, air fryer basket,t and oven rack. On top of that, a slide-out crumb pan is attached to both these toaster ovens. The additional items are similar for the TOA 60 and TOA 65.

Cuisinart is offering 3 years of limited warranty in the TOA 65 and TOA 60. As far as I have seen, most of the consumers got the warranty service while they claimed for it in terms of both the countertop toaster oven.

What is the differences between Cuisinart toa 60 vs toa 65?

The appearance is a bit different between the TOA 65 and TOA 60. Apparently, the Dimension of TOA 65 is larger than the TOA 60. In the meantime, TOA 65 comes with only one knob, a digital LCD, and six buttons to control and supervise the temperature and other functions. On the other hand, the TOA 60 comes with four knobs and only one button.

You might already get the idea of controls from the comparison chart above. One of the major difference between TOA 65 and TOA 60 is the controlling system. The TOA 65 comes with a digital controlling interface. But the TOA 60 comes with an analog controlling system. Furthermore, TOA 60 doesn’t come with a separate start/stop button, but the TOA 65 has a separate button to start/stop cooking. If you want to stop cooking in the TOA 60, you have to roll the timer knob backward to turn off the oven.

The Cuisinart TOA 60 comes with seven cooking functions including warm, bake, broil, convection bake, convection broil, toast, and air-fry. On the other hand, the TOA 65 has got almost the functions and many more except the convection bake and convection broil. For example, you’ll get defrost, dehydrate, braise, bagel, pizza roast, proof dough, dual cook, and slow cook.

The LCD Display truly defeats the TOA 60 from the TOA 65. Especially the younger generation prefers to have a digital touch on everything. At the same time, if you are a person who loves more functionalities and a digital screen, TOA 65 has been built for you. There’s no screen attached to the TOA 60 by the way.

If you’re a health-conscious person, the Airfry feature is definitely a loveable feature Cuisinart added for you. In the TOA 65, you’ll get some preset options for air frying which you won’t get in TOA 60. So, if you love to air-fry different items most often and would love to enjoy a bit more varieties, TOA 65 is the way to go.

Q: What is the difference between the Cuisinart Toa 60 and Toa-65?

You’ll find multiple differences between TOA 60 and TOA 65. For example, the controls, LCD display, temperature range, cooking options, appearance and many more. Check out the upper section for detailed information.

Q: How often should I clean the racks and are they dishwasher friendly?

Although the racks are made of stainless steel, you need to clean them every time you finish cooking. Either the grease will hardly stick to the surface which can be difficult to clean. While the manufacturer claims the items to be dishwasher safe, I recommend handwashing with a damp cloth and soapy water for better treatment.

After going through a detailed discussion on Cuisinart’s TOA 60 vs TOA 65 and rigorous testing, I feel the TOA 65 is the winner. However, that doesn’t mean you can’t or shouldn’t buy the TOA 60 in any way. Both these convection toaster ovens come with some excellent features that offer you value for your money.

Although the TOA 65 comes at a bit higher price, I think it’s justified because of the advanced features you’re going to get. Overall, I will vote for TOA 65 after comparing all the features and functionalities. 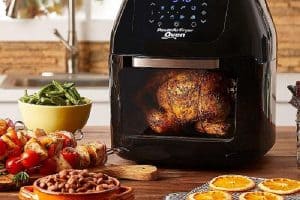 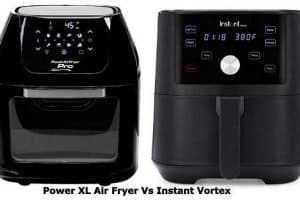 Power XL Air Fryer Vs Instant Vortex – Why You Should Consider Power XL? 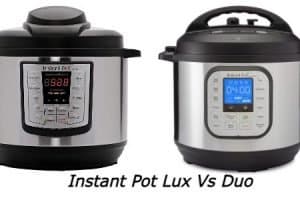 Instant Pot Lux Vs Duo – Why Pot Duo considered by most